Uber, the mobile application that connects individuals with private drivers, has launched the budget version of its service, UberX, in Johannesburg. UberBlack originally launched in South Africa late last year and now operates in Johannesburg, Cape Town and Durban.

UberX connects users with drivers of lower-end vehicles (typically Toyota Avanzas or Corollas) rather than the luxury BMWs, Mercedes and Audis used by the UberBlack service and costs substantially less. For example, the minimum fare for UberX is R20, compared to UberBlack’s R50.

Cape Town got its own UberX service two months ago, and according to Uber Cape Town’s general manager, Anthony Le Roux, the service now does as many trips each month as UberBlack does eight months after it launched. I used UberX extensively in Cape Town this week and found it as efficient and convenient as its more-pricey sibling service. For example, I ordered an UberX to take me from Tamboerskloof to the city centre, the car arrived in under three minutes and the journey cost less than R30 (around $3).

To promote the service, Uber is offering free UberX to all Johannesburg-based users of the service between now and 23h00 on Sunday, 17 August 2014. Users can use the promotional code “UBERXJHB”, which entitles them to up to six UberX journeys (of up to R250 each). 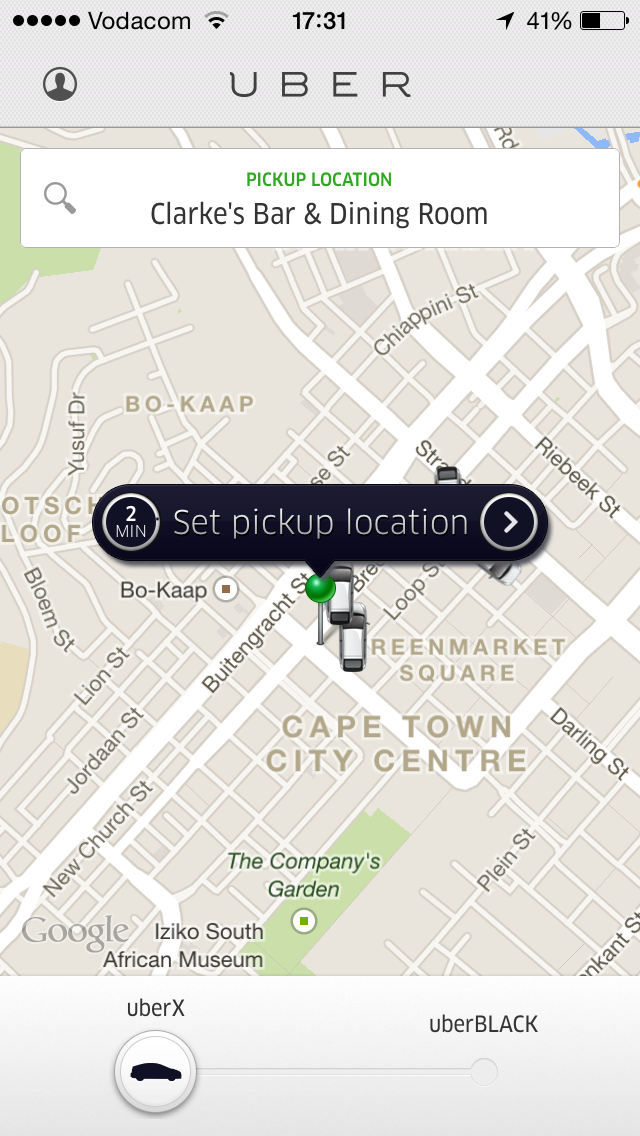 UberX uses the same app as UberBlack and thus offers the same benefits: cashless payments (users load a credit card when signing up for the service, which is automatically debited after each trip), the ability to track a driver’s progress after requesting a ride, the option to share information on your estimated time of arrival and trip progress with friends, and the ability to see a driver’s photo, rating, number plate and contact details before they arrive. When requesting a ride, users are presented with a slider than allows them to choose between UberX and UberBlack.

One of my favourite things about Uber is the fact that the same app (and linked card details) can be used in any of the 145 cities in 42 countries where Uber operates, making it ideal for frequent travellers. Another is the ability to split fares with other passengers. In the US, Uber is also beta testing a ride-share version of the service, called UberPool, that allows strangers to share rides – let’s hope they roll that out to other regions soon, because the combination of splitting fares and UberX’s budget rates would make for a compelling argument for Joburgers to ditch their cars for good.

Yesterday Uber announced that it was partnering with insurer Discovery. The deal will see Discovery members receive a 25% upfront discount on Uber trips, and those users who pay for their trips with a Discovery Card will be reimbursed up to an additional 20% of their net spend. Lastly, if a Discovery Insure client with a valid claim is injured in an accident that leaves them unable to drive they can waive their car hire benefit in exchange for Uber services of up to R5 000.

The Uber app is available for iOS, Android, Windows Phone and BlackBerry devices. The service is also available via a mobi site. — CW

If you haven’t tried UberBlack or UberX yet, use my promotional code “uberwilson” when signing up to get R90 of credit (if you do, I’ll get R90 of Uber credit, too).