In the simplest terms, Popcorn Time works by turning torrent files into streaming video. Torrents have traditionally been the preserve of the young and the technologically savvy because of the (albeit minor) barriers to entry: a prerequisite for downloading them is installing an application (or torrent client) that can piece them together, while getting the actual files requires navigating torrent sites themselves, which (understandably) put off nervous Internet users with their softcore-porn advertising, multiple pop-ups and misleading-looking links.

One of the reasons the service has proven so difficult to take down is its decentralised structure. Like the torrent sites from which it draws content, Popcorn Time doesn’t exist on any lone server or computer in a single location or jurisdiction. Even after the original developers took the service down earlier this year it resurfaced because the source code that drives it has been made public, which explains the screen the current version of the application shows at startup proclaiming that it “will never be taken down”.

The interface is as straight-forward as you could wish for and opens on the most popular movies by default, displayed in a grid of posters. Users can choose to between movies and series and can then filter each by genre. Clicking on an item opens a window with a summary of it and offers different quality versions (usually 720p or 1080p). Select “watch now” and the item buffers before playing.

In the playback menu there’s also the option to overlay subtitles (if available), often in a selection of languages, and the size of the subtitles can be altered. 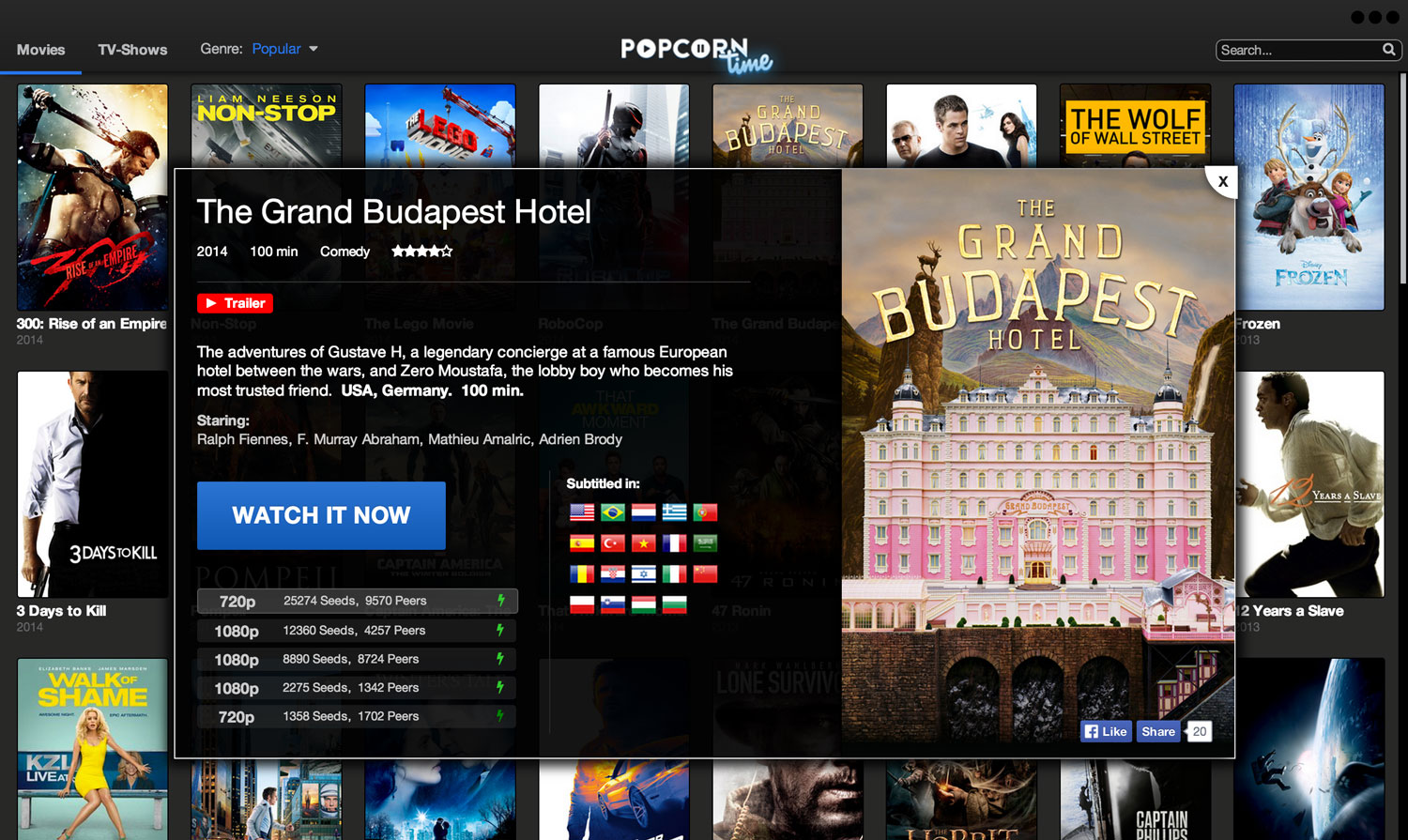 The only potential impediment for South African users is the connection speed required for most of the content. On a 10Mbit/s connection — that only actually offers a download speed of around 6Mbit/s — everything I’ve tried to play has done so after a few minutes of buffering (but without any interruptions thereafter), but friends using 4Mbit/s lines have reported that many items complete the buffering process but fail to actually ever play.

Connection problems aside, arguably the biggest problem with Popcorn Time is that it’s wholly, and inescapably, illegal. The original developers claim that “Popcorn Time as a project is legal”, and while that may be true from an academic standpoint, I’m pretty sure content distributors and international licensing bodies would beg to differ when it comes to said project’s real-world implementation.

That doesn’t, however, make Popcorn Time any less interesting as an example of a service that takes a longstanding and widespread (but labour-intensive) form of content acquisition and consumption (namely, torrents), and wraps it in a user-friendly, cross-platform application that sidesteps regional restrictions. Clearly, plenty of people want what Popcorn Time is(n’t) selling.

Netflix, Hulu and other streaming services are thriving because the convenience they offer (for a nominal fee) trumps the effort piracy usually requires. With Popcorn Time, or the similar services that will doubtless follow its lead, that unique selling point is largely eroded. Let’s hope, for the sake of legitimate services, that their outstanding recommendation engines and low monthly subscriptions are enough to keep their existing users loyal and that they roll out to additional regions — like South Africa — before other offerings take their place.  — CW