Read-it-later services like Pocket, Instapaper, Evernote Clearly (which reformats content saved to Evernote) and Readability are great for queuing up articles you come across at times when it’s not convenient to read them, and for stripping content to the parts that matter — making the entire reading experience far more pleasant.

That’s great news for avid readers, but bad news for publishers and the advertisers they rely upon to keep their publications afloat. However, given that a growing number of studies suggest users ignore online ads anyway (a phenomenon labelled “banner blindness” as early as 1997), perhaps apps that strip ads are merely expediting the inevitable demise of the medium.

Regardless, apps like Readability have a further appeal: they work across multiple devices. 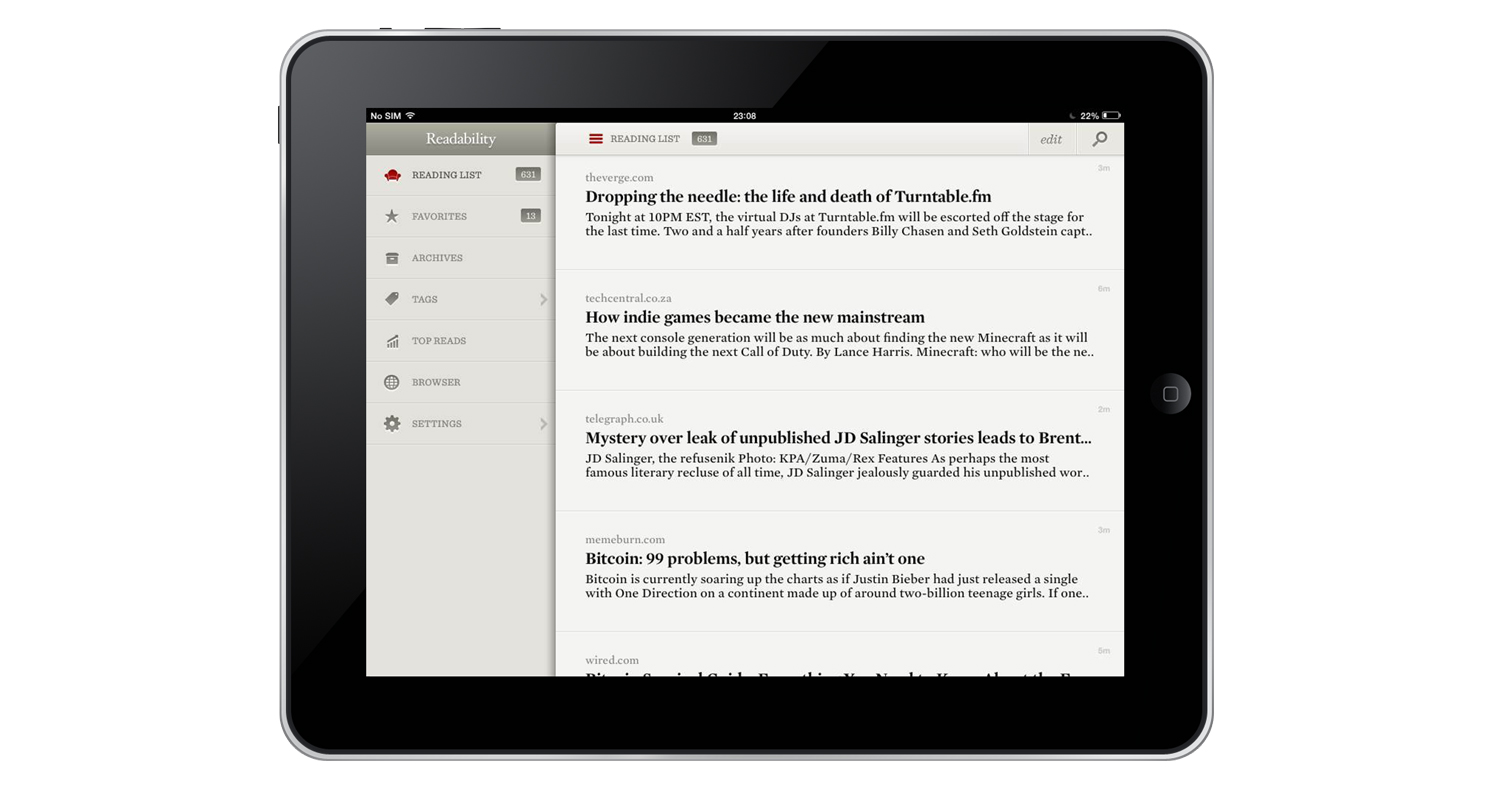 It was this support for devices other than laptops and desktops that first led me to try Pocket despite having used Readability for almost a year and a half. I have a Kobo e-reader (as opposed to the more common Amazon Kindle), and Pocket is one of the few services that supports pushing content to a Kobo. However, two things drove me back to Readability. The first was that I found I’m quite happy keeping my Kobo for books exclusively and reading shorter articles on my tablet or phone. The second was Readability’s simplicity.

If you want to save all manner of content — from articles to individual images or videos — Pocket is the better bet. But I don’t. I simply want a great reading experience. In this regard, two of Readability’s features trump Pocket’s to my mind. One is the ability to go straight to the next article in your list when you finish the current one by scrolling further when you’ve reached the bottom of the page — a gesture akin to literally “pulling up” the next article.

The second is Readability’s ability to gauge how long it will take you to read any given article based on those you’ve read previously. This number, displayed alongside each article’s title in the home screen “Reading List”, makes it easy to decide what to read based on the time to hand. Standing in a fast moving queue? No problem, pick a two- or three-minute read.

There’s a third reason I favour Readability over Pocket. While adding content to Pocket requires clicking a button in the toolbar Readability offers keyboard shortcuts. This makes saving articles and getting on with other things — like your day job — far more efficient. Like Pocket, Readability also offers the ability to tag saved content by displaying a small pop-up-style window (for five seconds) when adding content.

Despite closely resembling Readability in its layout and interface, I haven’t spoken about Instapaper at length here for one simple reason: it costs R32.99 (or $3.99) for iOS. Both Readability and Pocket, meanwhile, are free. Also, despite being a paid-service, Instapaper’s support for third-party apps isn’t as extensive as that offered by its two closest rivals.

There’s no doubt the read-it-later space is going to become even more crowded, whether from apps like Flipboard or Pulse (which look likely to integrate the same functionality in due course) or from the likes of Apple (which has already built a similar feature called Reading List into recent versions of its Safari browser) and even Facebook (which is rumoured to be working on its own service), but for now Readability remains my first choice.  — CW

Readability is available for as an extension for the Chrome, Firefox, and Safari browsers. It also offers bookmarklets for Internet Explorer and Opera, and as with most read-it-later services users can add content via email. On the mobile front, there are apps available for iOS and Android and the ability to send content to Kindle devices. Readability also plays beautifully with Twitter apps like Tweetbot, Echofon, Ubersocial and more, and with personal content-curation services like Flipboard. Click here for a full list of supported apps and devices.